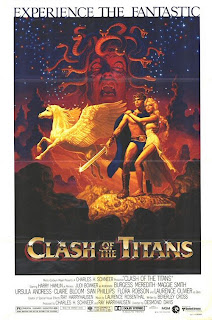 Most of the times good things come out of nowhere. Usually i watch a couple of films every week, 2009 was a very bad year for films (At least for my taste), so i had the chance to dig into some old stuff or spend some more time than usual to check the news for upcoming films or new trailers. Months ago and to my really big suprize i saw in a local news site that there will be a re-make of the legendary 1981 film "Clash of The Titans". This film is of a special importance to me, as a kid i remember the impression that this movie had to me. I was barely 8 years old when the teacher in my class in the history-hour put us to write a test about our favorite topic in Hellenic Mythology from the things that we learned so far. The first three writings had a award of a one free year of english lessons outside the school. My writing was about Perseus and Medusa and some days later the teacher announced to my parents that i was amongst the winners. Back to the movie, i remember together with a school mate we rent the video tape many times and watching it again and again. I was watching in front of my eyes the Heroes that back then i had only read about. The Atmosphere was pure magic!


The original version of Clash of The Titans is not anymore available in Hellas. It was only on video tape but now video tapes doesn`t exist and there is not any DVD version with Greek subtitles. To be honest , i never saw any DVD version of it in any language untill few years ago when with a friend we visited a huge film shop in Sussex, England and we found there a copy staying dusty in the shelves.


In 2010 there will be the re-make of this great film of my childhood. I`m very sceptical to new films when they have Mythological topic. We can easily see Zeus played by will smith or Perseus by samuel jackson. Coming to what abominations is hollywood able to do, this will not be a really big suprize. Though , as it seems in the new version of "Clash of The Titans" we will not have to worry for such matters. Two great actors are there Ralph Fiennes and Liam Neeson.
The movie is about to released in March of 2010. Till then i reccomend to all who reading this blog to check the original version of the film. To great suprize(Again!!) i found the original trailer in youtube. You can see it below.