(Part 2 of 3)
Why did the legend of Siegfried occupy such an important place in German culture in the moment Germany went through its darkest hour, when all promises of modernity amounted only to loss, nihilism, despair and death? What could the old legend offer that was so badly needed at a time when deprivation extended to all spheres of life, when even the most basic needs often went unattended? A few parallels with contemporary events, however meaningful, are not enough to justify the myth being held as an heirloom of such importance that it should be safeguarded and treasured, just when everything seemed hopeless and lost. If Lang’s Siegfried was to be more than just a piece of political propaganda, it had to reach for something beyond these parallels, for a veil that ran deeper into the depths of the German soul.

To uncover this veil, let’s look into some of the mythic aspects of the legend, as presented in the film. 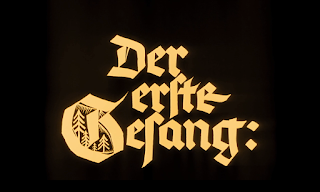 The first chapter or “song” opens with a young Siegfried working as a blacksmith apprentice under the dwarf Mime. Siegfried jauntily forges a blade as his master watches astonished; when the weapon finished and properly tested, the dwarf sends the young hero on his way, for even him, Mime, had nothing else to teach the young man. At this point we have to ask ourselves: who is Mime, what does he symbolize? Mime, Old Norse Mímir, is “memory, remembrance.” We know from the Eddas that at the root of Yggdrasil we find Mímisbrunnr, Mime’s Well, and that Odin sacrificed his eye to drink from it. We also know from the Völuspá that Mímir is beheaded, and that Odin carries his head around and gains counsel from it. Siegfried, thus, starts his journey by learning from Mime, i.e. by remembering. When even Mime, memory itself, has nothing left to teach the hero, he must follow on with his journey. What did Siegfried remember? He remembers himself, his past lives, the way into the eternal circle. Now that he has regained such memories, he is in possession of the key, and all that is left for him is to go in a quest to open the gate, i.e. to become himself. 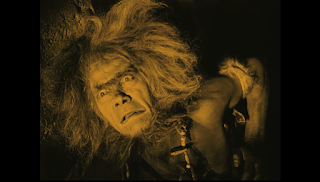 As the hero tends to his horse in preparation for the journey ahead, he hears from a dwarf about an imposing stone fortress built on the top of a hill. Inside the fortress he sees, like in an awakened memory, a hall full of warriors standing guard, imposingly holding their swords and shields. The fortress is presented by the dwarf as the castle of the King of Burgundy at Worms, by the Rhine. Siegfried, still reminiscing, glimpses a fair maiden walking down the hall, the maiden known as Kriemhild, and he’s spellbound by the vision, declaring he shall go to Worms and win her over. 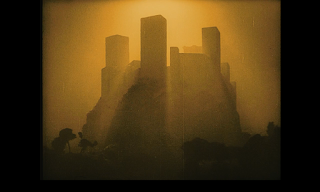 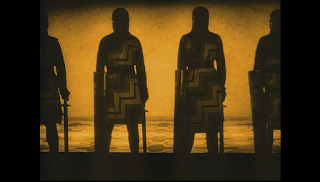 To understand the meaning of Siegfried’s vision, we need to understand who Kriemhild is and what she represents: The first element of her name, Kriem-, derives from Grim, Old Norse Grímr, “mask” or Grímnir, “masked one”; and the second element -hild, or Hildr, means “battle.” In the Thidrekssaga, Grim and Hilde appear as a couple of giants, and it is by slaying them that the hero Thidrek becomes famous. We know from the Grímnismál that Grímnir is one

of the many guises of Wotan, who in turn represents the accumulated honour of the ancestors. Hildr is known to be a valkyrie, Old Norse valkyrja, Valr- , “the dead, the slain,” or Val-, “the chosen,” and -kyrja, “to select, to choose;” the valkyrja is the one who decides who among the dead will be chosen to be reincarnated. By remembering his past lives under Mime’s guidance, thus, Siegfried comes to desire Kriemhild, i.e. he desires to be chosen by the valkyries and to be reborn as his ancestors, as Grim, i.e. Wotan. Knowing that, it becomes clear that the castle from Siegfried’s vision is in fact Valhöll, the “hall of the chosen”, described in the Grímnismál as the hall of Wotan, made of columns of spears and a roof of shields, the place where the “chosen ones” are taken by the valkyries. 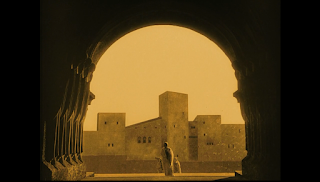 It is again Mime who sends Siegfried in his path to Worms/Valhöll, pointing him the way. As the dwarf bids him farewell, wishing him a good journey, the film cuts to a shot of the menacing dragon the hero soon will encounter. Defiantly, Siegfried draws his sword upon meeting the horrifying beast. A savage battle ensues, with the dragon breathing fire upon his opponent; but the hero manages to avoid the worm’s lethal flames and to pierce through his soft belly with his sword, emerging victorious from the deadly confrontation. Afterwards, Siegfried bathes himself in the blood of the defeated beast, after being instructed to do so by a bird. The serpent/dragon is associated with the chthonic depths, as in the case of Python, the serpent slain by Apollo (from PIE *dhubh-(o)n-, from *dheub- “hollow, deep, bottom, depths”). They connect the living to the dead, the inhabitants of the depths, of the burial mounds. M. Cachet relates the slaying of the dragon to the cutting of the umbilical cord, thus associating it with (re)birth (see Le Secret de l’Ourse). Siegfried’s skill and valour, which render him virtually invulnerable, are codified in his genes and passed down to him from his ancestors (from the dead) in the conception and gestation processes, so that he (re)gains them by bathing in (i.e. being nourished by) the blood of the dragon (the amniotic fluid). It is from the singing of a bird, as mentioned above, that Siegfried learns to bathe in the blood of the worm − birds usually appearing in myths as messengers of the underworld (e.g. the Greek sirens) and, again according to Cachet, serving as avatars for the umbilical cord. 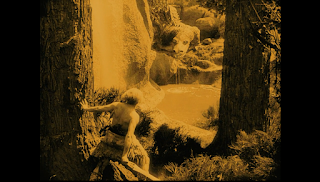 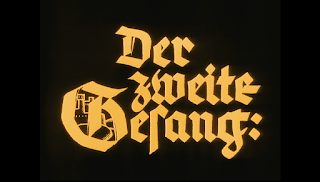 With the slaying of the giant worm, thus, Siegfried is reborn, and the first act is over. The second “song” initiates with the bard at King Gunther’s court singing about how Siegfried, the dragonslayer, had entered the realm of the Nibelungen. Now the hero starts his descent into the underworld, into Nibelheim/Niflheim, “Mist-home,” the land of the dead. As he rides through the misty landscape, he is suddenly attacked by an invisible foe: it’s the dwarf Alberich, guardian of the Nibelung's treasure, hidden under the magic of his Tarnkappe, his cloak of invisibility. Siegfried is able to subjugate the invisible attacker and to remove the cloak from his head, revealing the dwarf, who begs for his life, offering the hero both the magical cloak and the treasure he guards in exchange for being spared. 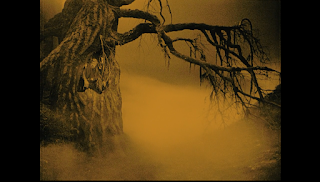 Here Siegfried starts the third step of the reincarnation process, when the initiate, after being conceived and born, enters the burial mound to retrieve the honour of his dead ancestors, together with their treasures, finally becoming himself again. The dwarf, proto-Nordic *dwurgê,
“opening on the ground”, is the dweller of the burial mound, i.e. the corpse, the body of the dead ancestor. A dwarf is also called a dark elf: The elf, Norse alfr, proto-Nordic *albaR, PIE *alba-, meaning “white”, is the reborn spirit of the ancestor, moving from the darkness of the burial mound or the womb towards the light of the sun (like the initiate in Plato’s cave allegory). The dark elf, thus, is the physical remains of the dead who stays in the mound. Mime, represented as a dwarf in the myth, is Mímir’s head, i.e. the actual head of the ancestor, where his memories are stored. The second dwarf Siegfried meets, Alberich, Old Norse Alfrikr, is the “king of elves”, (alf, albe = “elf”, reix, rex = “king”; later he appears as Oberon in King Arthur’s legendry). He is the dead ancestor whose shadow will guide the hero through the misty underworld of the burial mound, to the treasure of the Nibelungen, i.e. his belongings from his previous lives. 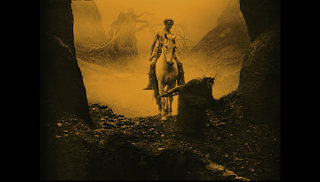 There, the hero retrieves his géras, the material representation of his honour (timé), as the Greeks called it in the age of Homer. By wielding the sword and wearing the armour of his ancestors, he is now seem and recognized as them, and his glory (kléos) is sang by the bards, reaching the court of king Gunther in Worms and the ears of the fair Kriemhild. Once becoming the king the Nibelungs, Siegfried is said to have conquered twelve kingdoms, having twelve kings as his vassals − the twelve sons of Wotan, the sum of the ancestor’s honour, now incarnated by the hero 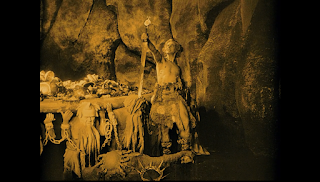 By the end of the second act, Siegfried arrives in Valhöll. The Gjallarhorn resounds announcing his arrival. He enters the Hall of the Chosen and is met by Kriemhild. His initiation journey is complete; he is now Wotan, himself given to himself 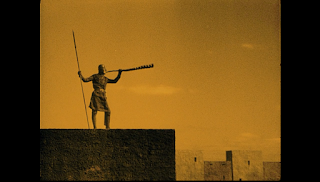 Dragged down to an unprecedented spiritual crisis by the irresistible process of modernization, Germany found itself hopelessly lost in the years after the Great War. Death befell heavily upon the Germans, and their ill-fated defeat rendered the whole experience pointless and disorienting. Retrieving the hero-cult of Siegfried from a lost glorious Germanic past, in face of that, provided a means of re-signifying death itself; it meant a call for rebirth, a light pointing the way amidst all the dreadful darkness. New life was breath into the German people as it reached for the honour of its legendary heroes. Siegfried, in this context, stood in the vanguard, leading the hordes of the chosen dead; by honouring the mythical hero, Germany was honouring its fallen sons, the millions of soldiers who sacrificed their lives for their people in the trenches, and at the same time it was sending a call to all those still breathing, urging them to pick up weapons of the fallen and to keep on fighting. Even those who ignore the hidden meanings and intricacies of the mythic narratives can be touched and inspired by them, by their form and effect. The distinctive symbolic language touches the inner core of the soul, playing with primordial images and stimulating ancestral memories, providing the myth with undying appeal. Even when the most disenchanted rationalistic tendencies reached their peak in the history of modern thought, the myth didn’t yield; and when the time was right it returned in triumph, as it was bound to happen. It was inthe 19th century, when the Germans were still deeply infatuated with the ancient Greeks, that the Siegfried-mythos first gained great prominence in modern times, featured in Wagner’s opera. In the 1920s, cinema was a raising new form of art, and the timing was perfect for revisiting the hero’s legend and rekindling his cult. The gift Lang and Harbou were offering to the German people, with their film Siegfried, was the German people itself, given back to itself − like Wotan, hanging on the Sacred Tree...