The Untersberg: Mountain of Ones Below

Article taken from: THE BLACK ORDER 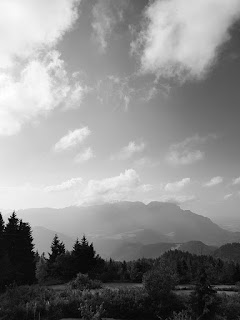 (View of the Untersberg from Berchtesgaden)

The morning of our hike to the top of the Untersberg started off with, despite it being summer, less than ideal weather. It was wet, cold and the whole area was camouflaged in thick fog and mist. It was perfect. The mountain was reserving it’s secret and we had to sweat first, we would get to experience it’s magnificence later . We had arrived the night before in the small town of Sankt Leonhard in Austria, in darkness, and had yet to get our first glimpse of this mythical mountain. The Untersberg had long been a place of great interest. It has been known, throughout history, by different names, all invoking it’s sense of mystical importance: The Midnight Mountain, The Mountain of Destiny, The Magic Mountain and Wotan’s Mountain. The stories and legends surrounding this place are enough to fill several books. All of this was the source of excellent discussions and inspiration on the assent through the mist to the summit. 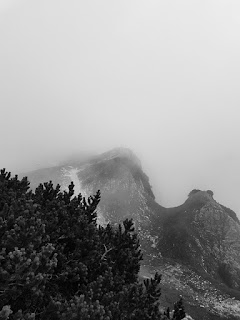 The hike up the narrow pathways took almost four hours. The cold had given way to heat and each step seemed heavier than the previous. In the distance we could see other visitors in a cable car, the fastest way up. It felt good that we, with small children, choose the more demanding route. What purpose does it serve to reach the top of a mountain without ever having to stop to catch your breath or stumble on a rock? Do you really experience the mountain when your view is through a piece of glass, or in probably the majority of cases – through the view finder of your “smart”phone? Do you get to stop and take in your surroundings? You cannot fully experience nature from behind a pane of glass. I thought about Evola’s”generation of crisis” and then of those in the glass cage, speeding up the mountain side, the products of “dry intellectualism” and this “bourgeois sentimentalism”. For them the mountain is nothing more than a photo-op. They are attracted to the mountain, but they miss the point and ultimately they do not experience it. 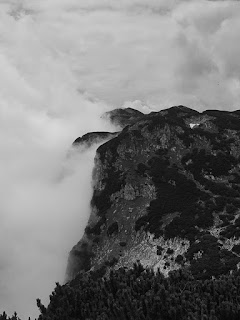 We reached the summit somewhere after 13:00 and walked around to find somewhere to eat our lunch. We found a small spot, over looking the remains of a ice cave, which still contained a great deal of snow and ice in the warm August summer. The Untersberg is filled with underground caves and tunnels. There are many local ledgends talking about dwarves and other such subterranean creatures carving out an underground network. The Dali Lama insited on visiting the mountain, calling it: the heart chakra of mother earth and brother of holy Kailash, the crown chakra. The sleeping dragon. The most famous story of the Untersberg is that of The Sleeping Hero, Emperor Karl V resides there (Barbarossa sleeps at Kyffhäuser), sleeping, until his bread has grown three times around the mountain. Another story says that he will awaken, when 24 ravens fly three times around the mountain. The mixing up of Karl V and Barbarossa are not important. It speaks to the power of the Untersberg in the collective folk-consciousness. The idea of The Sleeping Hero is something which we find all over the European Nation. King Arthur and Freebrough Hill, Fionn mac Cumhaill in Ireland, Holger Danske in Denmark, The Knights of Ålleberg in Sweden et cetra. It is an interesting footnote that material used in the construction of the Walhalla Monument in Regensburg is taken from the Untersberg, testament to it’s importance.

After we had finished lunch, we explored the summit a little more. We came across the monument to Fallschirmjäger. A more fitting monument to these warriors I could not imagine. Free from all the usual guilt ridden exceptionalism. A testament to bravery and self sacrifice. While we were looking at the monument I struck up a conversation with a local hiker. He turned out to be something of an interesting source of conversation. He told me of a story of the Knights Templar which I had not previously known about. German Knights, having been instructed by an apparition to build a temple near the Untersberg at Markt Schellenberg, formed a secret society known as Die Herren vom Schwarzen Stein (DHvSS) (Lords of The Black Stone) where legend says they received the secret teachings and knowledge of the Holy Grail. In 1917 Rudolf von Sebottendorf met with members of the DHvSS at the Untersberg in the hope of receiving the esoteric knowledge of The Black-Purple Stone (the Grail). We talked about the strange lure of the Untersberg. There are many mountains in the area but this one is something special. The Untersberg sits in the middle of a massive cross section of magnetic fields so-called ley lines. These are the invisible force that our ancestors knew well, built houses according to their direction and animals use them as compasses. They are connected to every sacred site on earth. Research suggests that the more powerful the magnetic field, the more of an affect it will have on the pineal gland. 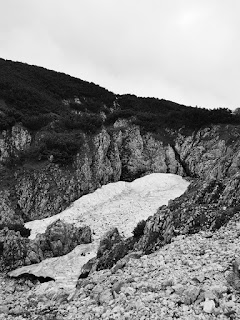 (Ice Cave entrance)
We decided that it was getting late and made the trip down the mountainside to our hotel. I always find the trip down to be worse than the hike up. It takes more effort to keep yourself straight on these rocky pathways. The entire way down we talked about Knights Templars and hidden esoteric knowledge, about the Trolls who live in the the mountain, so much in common with the tales of trolls of Norwegian folklore. We discussed if Tolkien was perhaps influenced by the The Sleeping Hero story of the Untersberg, when Aragorn calls upon the the King of the Mountain and his army. On the way down we once again saw the cable car rushing past us in the distance. It was amusing to hear my youngest daughter snigger that it seemed ridiculous to her that these people, speed up in 5 minutes, take pictures of themselves at a summit marker, eat a hearty lunch at a cafe as if they needed it after such strenuous exercise, then speed back down again, all in the space of an hour. Nothing of value comes easy. Human nature is such that it evolves and ultimately is most content in adversity. It seems cynical and almost pathetic to speak of an experience as “spiritual” in this modern day. That word is throw around like confetti, losing it’s value in most tongues. It is either lost in the mindless ramblings of the arm-chair intellectual or in those social media posts of the cattle we witnessed speeding up the side of the mountain in a hurry, but a truly spiritual experience was had, witnessing and experiencing Nature in a primordial and personal sense.

During a good meal of goulash soup at our hotel it was decided that next winter we will return to witness Die Wilde Jagd at the Untersberg…. 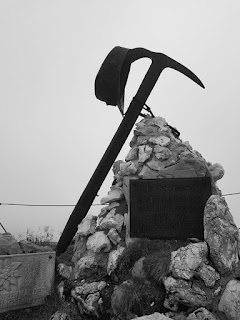