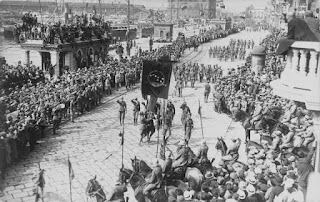 
From "Fiume Under D’Annunzio,"
THE TIMES (London,England)


It is a great mistake to underrate D’Annunzio. This mari is a real force, not only by what he has been in the past, but by what he is, and stands for, to-day. No one did more to bring Italy into the war, and some of his speeches then, like his Fiume orations now, will endure as long as the Italian language. He fought on land, at sea, and in the air. He was severely wounded, and even after the loss of his right eye he remained in the fight. He has always dreamed of a greater Italy, supreme in the Adriatic and extending its influence over the Balkans. He is quite sure that Italy has been robbed of the spoils of victory by the “ingratitude and egotism” of the Allies, and he is just as ready to give his life now for what he .believes to be his country’s due as he was to die for her in battle. D’Annunzio possesses both constructive imagination and executive ability. He is an untiring worker, and has that divine gift of personal magnetism which attracts the loyalty and devotion of other men. There can be no question of his power to sway the masses. The almost religious admiration in which he is held by the regular Italian forces - officers and men of the Army and Navy alike - is surpassed only by the fanatical fervour of his own followers.

But his Arditi have other and more immedi; ate proofs of his power to perform miracles for them! For 13 months Fiume has lived i without working. The wharves are deserted, the railway is over-grown with ! weeds, the factories are mostly shut—— the great Whitehead torpedo shop, which in 1913 employed 1,800 men, now has only 1 some 350 workers. Business in the town I is limited to supplying its needs and I doing a little trade with Trieste, Venice ! and parts of Dalmatia. And yet in some j totally unexplained fashion the soldiers are paid, the unemployed are given bounties, food is plentiful and, compared with other Italian cities, living is cheap. 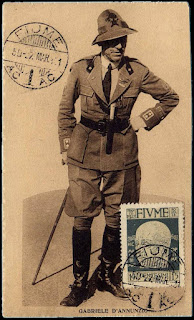 The soldiers and sailors get regular Italian army rations, with something added, and extra allowances of wine. Of everything there is an abundance, not excepting money. Fiume is the only city to-day where one gets real pure wheat bread made from the finest white flour. It t as tes J ike cake. Indeed, the other day,

D’Annunzio was able to sell 2,000 tons of white flour to the Austrians.

During the early days of his occupation of Fiume, D’Annunzio’s whole program was summed up in the words Italia, o Morte! and every preparation was made for the defenders to sell their lives as dearly as possible and destroy the town rather than surrender it. Fiume was thoroughly mined and everything made ready to blow up public buildings, highways, water mains, wharves, piers, warehouses, etc., if need should arise. The town is still mined, but D’Annunzio knows now that he will never be called upon to defend it against Italian troops. Indeed, he is entirely surrounded and protected by the Italian Army of’ Occupation, which has been thrown forward, beyond the Treaty of London line, and now occupies the heights above Buccari, where a small force of Yugo-Slavs is stationed. 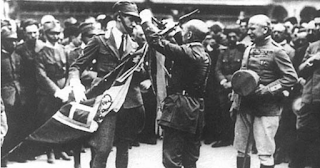 No Italian soldier will raise a hand against him, for does he not wear the medal of the mutilated and the# Gold Award of Valor—the equivalent of the Victoria Cross? Much of the immediate future of Italy may be bound up in the three words D’Annunzio has inscribed upon his banner:
Quis Contra Nos.