A Painting as an Embodiment of Modern Western Democracy

As we all know, oftenly paintings were created portraying symbolically various things. The Renaissance painters used mythologial themes and figures that their era was found upon. The same goes for the Dutch and Flemish school of art. In more times, the modern (see degenerate) so called "art" depicted themes based on its surroundings or the "ideals" of its creators ( Pablo Picasso etc).
Earlier today, I saw in the news the latest on the Jeffrey Epstein's case. The jewish pedophile that commited suicide (even many are still in doubts about it) few days ago. According to this news, a painting portrait was found in Epstein's office in Manhattan, New York.
And its this one: 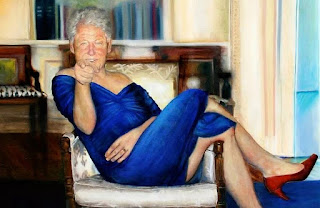 Its already in the news all over the world and dont fool yourself. This is a very valuable piece of our times. The american colours (red, white and blue), the reference to uncle sam's "I want you" and that its an american president in women's clothes and the fact that the painting found in his jewish closed friend's home, for me makes this the PERFECT EMBODIMENT of our times and the nature of modern western democracy.