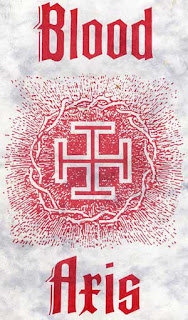 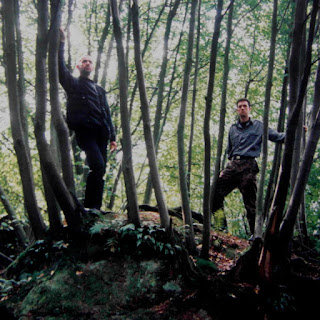 "UP TO NOW only four pieces of music by Blood Axis have been issued, all of them appearing on CD compilations released by the small German records label Cthulhu Records. The songs "Lord of Ages" and "Electricity" were recorded in the winter of 1990 and released in the summer of 1991 on the CD The Lamp of the Invible Light, together with songs by Ain Soph, Autopsia, Sol Invictus and others. In "Lord of Ages", a hymn to Mithras by the British writer Rudyard Kipling was set to music adapted from the "Overture to The Sun" from the film Clockwork Orange. "Electricity" dealt with the influence of electricity on the human organism, in its physical as well as its mythological aspects. For this song Moynihan used short excerpts from the opera Electra by Richard Strauss. In the booklet accompanying the CD he quoted a section from the book by Liebenfels that refers to the relationship between electricity and divinity. 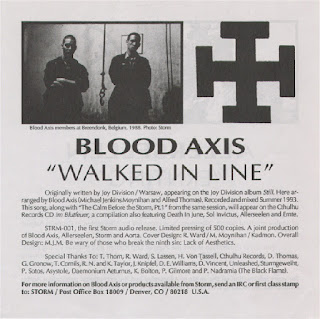 In summer 1994 a single with the songs "Walked in Line" by Blood Axis, a cover version by the British group Joy Division, and "Ernting" by the Austrian formation Allerseelen. Virtually at the same time, "Walked in Line" came out on another Cthulhu Records CD compilation called Im Blutfeuer. In addition to works by Allerselen, Death In June, Ernte, and Sol Invictus, the CD also featured a second song by Blood Axis: "The Storm Before The Calm". This composition combined sounds from a nocturnal thunderstorm with a piano motif sampled  from a recording of Friedrich Nietzsche's "Heldenklange" ("Hero's Lament"), which was composed in 1862. Over this soundscape, Moynihan recited several excerpts from Ernst  Jünger's parable On The Marble Cliffs, in both English and German. At one point an original speech from the thirties by the Romanian visionary and Iron Guard found Corneliu Zelea Codreanu can also be heard. This oeuvre was dedicated to Ernst Junger, who celebrated his hundredth birthday on 29.III.1995."