Family and The Land - The Case of Paulina Forslund 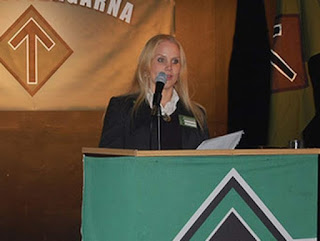 Whats the model of white woman that promoted today? To put in short, its the "sex and the city" type of woman. A big number of White females today are turned into miserable creatures who think that they are "free" and "independent" only because of changing sex partners every night, getting as much drunk and "high" as possible, spending entire days on shopping malls or teaming up with asian and africans apes just because they want to follow their music or fashion idols.
Sad but true.

On the other side there are females like Paulina Forslund. A Swedish woman, mother with a family and National Socialist activist married with a man with equal idelas and way of living.  Thats "fatal errors" for the preachers of cosmopolitanism which have the upper hand in the ruling of the European nations todays. Despite the 24h propaganda for the opposite, Paulina Forslund is giving the "bad example". She choose the hard way of dignity and pride, the "Family and The Land" instead of crawling in the mud of "sex and the city" and other similar degenerate ways.
The video that follows will give you more details. Support this woman by your donation or at least spread this around to more people. Keep in mind that by doing nothing, its like leaving our women alone to the claws of the enemies of Europe.