The Flute Concerto of Friedrich The Great

"Frederick was a patron of music as well as a gifted musician who played the transverse flute.He composed 100 sonatas for the flute as well as four symphonies. The Hohenfriedberger Marsch, a military march, was supposedly written by Frederick to commemorate his victory in the Battle of Hohenfriedberg during the Second Silesian War. His court musicians included C. P. E. Bach, Johann Joachim Quantz, Carl Heinrich Graun and Franz Benda. A meeting with Johann Sebastian Bach in 1747 in Potsdam led to Bach's writing The Musical Offering." 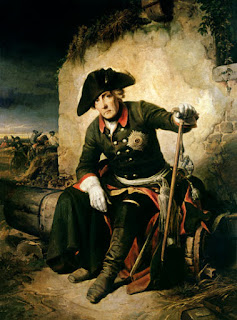