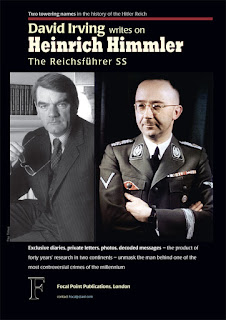 David Irving, probably the best historian alive is going to release another great piece based on his always reliable and in-depth researches and sources. The biography of Reichsführer-SS Heinrich Himmler.
Judging from what Irving writes at his site and say at is public lectures, this gonna be a full mammoth biography of Himmler from his early childhood up to his death in 1945. It was about time! To my knowledge so far there has never been a proper full biography of Himmler. But even if he as been one, i`m sure that there is things that none knew so far.
For example:

- There was never a negotiation between Himmler, jews and allies. Hence, he was not a betrayer "acting behind Hitler`s back to save his own skin"
- Himmler was murdered (Beaten to death) by a British agent in a "specially fixed house"
- His diaries from his very young age and student years shows the truly exceptional and intresting personality he was. His noble idealism and remarkable character that led him to his marvelous political achievements during the Reich years. Also the diaries reveal sides from him that very few knew so far.
...and many more!

Anxious about it myself, earlier this summer i wrote an e-mail to David Irving asking how the progress of this book is going. Here is his answer:

Work on Himmler is trudging ahead. Then comes the task of shortening him. Late this year I think.
He gets worked on every day

David Irving as a top class historian is a perfectionist. Lets hope that the release of this book will be during 2015.
In the meantime, you can check these intresting videos:

An Irving welcome-video for his online bookstore. However this video is Himmler-related. He reveals a part of his sources for this upcoming biography.

An Irving lecture about Himmler. A really intresting video! there you`ll find more details on Himmler`s death (On this video Irving reveals the name of the agent that killed Himmler) as well his youth years and many other intresting things.

More info as soon there will be any....