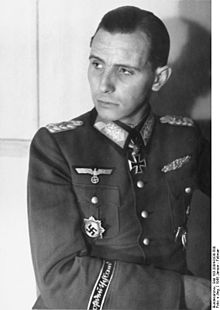 "Remer played a leading role in the formation of the postwar "Socialist Reich Party," which, after winning 16 seats in a state parliament, was banned in 1952. Remer than lived in exile for several years in Egypt and Syria. He also wrote two books, including "Conspiracy and Treason Around Hitler" (Verschwörung und Verrat um Hitler), a memoir and study reviewed by H. Keith Thompson in the Spring 1988 Journal.

As a featured speaker at the Eighth (1987) Institute for Historical Review Conference, Remer spoke on "My Role in Berlin on July 20, 1944." (His address was published in the Spring 1988 Journal, and is available on both audio- and video-tape from the IHR.)

In October 1992 a German court in Schweinfurt sentenced him to 22 months imprisonment for "popular incitement" and "incitement to racial hatred" because of allegedly anti-Jewish "Holocaust denial" articles that had appeared in five issues of his tabloid newsletter, Remer Depesche. The judges in the case flatly refused to consider any of the extensive evidence presented by Remer's attorneys. (See the March-April 1993 Journal, pp. 29-30, and the May-June 1994 Journal, pp. 42-43.)

To avoid imprisonment, in February 1994 Remer sought exile in Spain. (See the July-August 1995 Journal, pp. 33-34.) German authorities sought his extradition, but Spain's highest court rejected these requests on the basis that Remer's "thought crime" was not illegal in Spain. Nevertheless, until the final weeks of his life, German authorities persisted in their efforts to extradite the dying octogenarian so that he could be imprisoned in Germany.

Many of the numerous newspaper reports that have appeared about Remer over the years have contained demonstrable falsehoods. For example, he has repeatedly, and inaccurately, been referred to as a former "SS man" or "SS officer." In fact, he was never even a National Socialist party member.

Newspapers also reported that Remer "denied the murder of Jews" or "declared that no Jews were murdered under the National Socialist regime." Actually, Remer pointed out, "I have never denied that Jews were killed during the Third Reich, but have only disputed the figures of Jews who died in Auschwitz and the alleged method of killing" (that is, in gas chambers).

The Remer case points up the strange and even perverse standards that prevail in Germany today. Although his "crime" was a non-violent expression of opinion, to dispute claims of mass gassings in wartime concentration camps is regarded in today's Germany as a criminal attack against all Jews, who enjoy a privileged status there.

More than half a century after the end of the Third Reich and the Second World War, Germans are ceaselessly exhorted to "never forget" the anti-Jewish measures of the Hitler era, to atone for what is called the most terrible crime in history, and to regard themselves as a nation of criminals and moral misfits. As a further expression of the country's "national masochism," the July 1944 conspirators are officially venerated, while outstanding wartime combat heroes and selfless patriots such as Remer are dishonored.

Particularly in Germany, the struggle on behalf of historical truth is not merely an academic question -- it is an issue of national survival.

If Germany were ever to find itself in another major war, it would be suicidal stupidity to cite as role models for its soldiers and officers the individuals who, at a time of national emergency, tried to assassinate the nation's leader and overthrow the government in a murderous putsch.

Every nation with a healthy survival instinct naturally venerates, particularly in time of war, individuals of exemplary self-sacrifice, patriotism, and heroism -- men of the caliber of Otto Ernst Remer."