The Birth, Life & Death of Alexander The Great 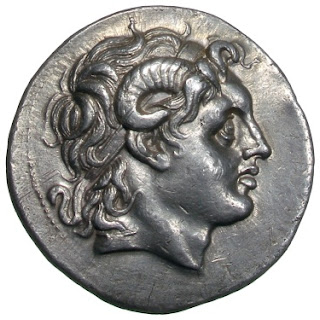 I know the title of this post sounds a bit cliche. Some weeks ago, i was reading Alexander`s biography in by Plutarch in his "Parallel Lives".  There are several  moments about Alexander the Great (Starting before his birth, during his life and death)  "Unknown" to most people who have not studied deeper the life of this great Hellenic warlord. So i thought it will be a good idea to put some of them here. I choose in my opinion the most intresting ones. There are much more. If you are intrested further, just check Plutarch.


"Well, then, the night before that on which the marriage was consummated, the bride dreamed that there was a peal of thunder and that a thunder-bolt fell upon her womb, and that thereby much fire was kindled, which broke into flames that travelled all about, and then was extinguished. At a later time, too, after the marriage, Philip dreamed that he was putting a seal upon his wife's womb; and the device of the seal, as he thought, was the figure of a lion"

"However, after his vision, as we are told, Philip sent Chaeron of Megalopolis to Delphi, by whom an oracle was brought to him from Apollo, who bade him sacrifice to Ammon and hold that god in greatest reverence, but told him he was to lose that one of his eyes which he had applied to the chink in the door when he espied the god, in the form of a serpent, sharing the couch of his wife. Moreover, Olympias, as Eratosthenes says, when she sent Alexander forth upon his great expedition, told him, and him alone, the secret of his begetting, and bade him have purposes worthy of his birth. Others, on the contrary, say that she repudiated the idea, and said: "Alexander must cease slandering me to Hera."

VISIONS OF THE CONQUEROR


"He once entertained the envoys from the Persian king who came during Philip's absence, and associated with them freely. He won upon them by his friendliness, and by asking no childish or trivial questions, but by enquiring about the length of the roads and the character of the journey into the interior, about the king himself, what sort of a warrior he was, and what the prowess and might of the Persians. The envoys were therefore astonished and regarded the much-talked of ability of Philip as nothing compared with his son's eager disposition to do great things"

"And now a general assembly of the Greeks was held at the Isthmus, where a vote was passed to make an expedition against Persia with Alexander, and he was proclaimed their leader. Thereupon many statesmen and philosophers came to him with their congratulations, and he expected that Diogenes of Sinope also, who was tarrying in Corinth, would do likewise. But since that philosopher took not the slightest notice of Alexander, and continued to enjoy his leisure in the suburb Craneion, Alexander went in person to see him; and he found him lying in the sun. Diogenes raised himself up a little when he saw so many persons coming towards him, and fixed his eyes upon Alexander. And when that monarch addressed him with greetings, and asked if he wanted anything, "Yes," said Diogenes, "stand a little out of my sun." It is said that Alexander was so struck by this, and admired so much the haughtiness and grandeur of the man who had nothing but scorn for him, that he said to his followers, who were laughing and jesting about the philosopher as they went away, "But verily, if I were not Alexander, I would be Diogenes."

SON OF THE GODS

"And now, wishing to consult the god concerning the expedition against Asia, he went to Delphi; and since he chanced to come on one of the inauspicious days, when it is not lawful to deliver oracles, in the first place he sent a summons to the prophetess. And when she refused to perform her office and cited the law in her excuse, he went up himself and tried to drag her to the temple, whereupon, as if overcome by his ardour, she said: "Thou art invincible, my son!" On hearing this, Alexander said he desired no further prophecy, but had from her the oracle which he wanted."

THE ENEMIES AND THE DOCTOR

"Dareius was still more encouraged by Alexander's long delay in Cilicia, which he attributed to cowardice. The delay was due, however, to a sickness, which assailed him in consequence of fatigues, according to some,but according to others, because he took a bath in the river Cydnus, whose waters were icy cold. Be that as it may, none of the other physicians had the courage to administer remedies, but thinking that the danger was too great to be overcome by any remedy whatever, they were afraid of the charges which would be made against them by the Macedonians in consequence of their failure; but Philip the Acarnanian, who saw that the king was in an evil plight, put confidence in his friendship, and thinking it a shameful thing not to share his peril by exhausting the resources of art in trying to help him even at great risk, prepared a medicine and persuaded him to drink it boldly, if he was anxious to regain his strength for the war. Meanwhile, however, Parmenio sent a letter to Alexander from the camp, urging him to be on his guard against Philip, for the reason that he had been persuaded by Dareius, with the promise of large gifts and a marriage with his daughter, to kill Alexander. Alexander read the letter and placed it under his pillow, without showing it to any one of his friends. When the time appointed was at hand, and Philip came in with the king's companions, carrying the medicine in a cup, Alexander handed him the letter, while he himself took the medicine from him with readiness and no sign of suspicion. It was an amazing sight, then, and one worthy of the stage, — the one reading the letter, the other drinking the medicine, and then both together turning their eyes upon one another, but not with the same expression; for Alexander, by his glad and open countenance, showed his good will towards Philip and his trust in him"


"For in the stress of affairs he was not to be detained, as other commanders were, either by wine, or sleep, or any sport, or amour, or spectacle. This is proved by his life, which, though altogether brief, he filled to overflowing with the greatest exploits. In his times of leisure, however, after rising and sacrificing to the gods, he immediately took breakfast sitting; then, he would spend the day in hunting, or administering justice, or arranging his military affairs, or reading. If he were making a march which was not very urgent, he would practise, as he went along, either archery or mounting and dismounting from a chariot that was under way. Often, too, for diversion, he would hunt foxes or birds, as may be gathered from his journals. After he had taken quarters for the night, and while he was enjoying bath or anointing, he would enquire of his chief cooks and bakers whether the arrangements for his supper were duly made. When it was late and already dark, he would begin his supper, reclining on a couch, and marvellous was his care and circumspection at table, in order that everything might be served impartially and without stint;"

"Moreover, as he was dispatching great quantities of the spoils home to Olympias and Cleopatra and his friends, he sent also to Leonidas his tutor five hundred talents' weight of frankincense and a hundred of myrrh, in remembrance of the hope which that teacher had inspired his boyhood. It would seem, namely, that Leonidas, as Alexander was one day sacrificing and taking incense with both hands to throw upon the altar-fire, said to him:— "Alexander, when thou hast conquered the spice-bearing regions thou canst be thus lavish with thine incense; now, however, use sparingly what thou hast." Accordingly, Alexander now wrote him: "I have sent thee myrrh and frankincense in abundance, that thou mayest stop dealing parsimoniously with the gods."

"After sending this message to Parmenio, he put on his helmet, but the rest of his armour he had on as he came from his tent, namely, a vest of Sicilian make girt about him, and over this a breastplate of two-ply linen from the spoils taken at Issus. His helmet was of iron, but gleamed like polished silver, a work of Theophilus; and there was fitted to this a gorget, likewise of iron, set with precious stones.  He had a sword, too, of astonishing temper and lightness, a gift from the king of the Citieans, and he had trained himself to use a sword for the most part in his battles. He wore a belt also, which was too elaborate for the rest of his armour; for it was a work of Helicon the ancient, and a mark of honour from the city of Rhodes, which had given it to him; this also he was wont to wear in his battles. As long, then, as he was riding about and marshalling some part of his phalanx, or exhorting or instructing or reviewing his men, he spared Bucephalas, who was now past his prime, and used another horse; but whenever he was going into action, Bucephalas would be led up, and he would mount him and at once begin the attack."


THE GREATNESS OF A TRUE KING
"Again, a common Macedonian was driving a mule laden with some of the royal gold, and when the beast gave out, took the load on his own shoulders and tried to carry it. The king, then, seeing the man in great distress and learning the facts of the case, said, as the man was about to lay his burden down, "Don't give out, but finish your journey by taking this load to your own tent." Furthermore, he was generally more displeased with those who would not take his gifts than with those who asked for them. And so he wrote to Phocion in a letter that he would not treat him as a friend in future if he rejected his favours. Again, to Serapion, one of the youths who played at ball with him, he used to give nothing because he asked for nothing. Accordingly, whenever Serapion had the ball, he would throw it to others, until the king said: "Won't you give it to me?" "No," said Serapion, "because you don't ask for it," whereat the king burst out laughing and made him many presents."

THE DAY OF DEATH

"During this day, too, Python and Seleucus were sent to the temple of Serapis to enquire whether they should bring Alexander thither; and the god gave answer that they should leave him where he was. And on the twenty-eighth,towards evening, he died."