The Years with Richard Scutari
By Henrik Holappa

Sometimes there are decisions in life which affect our whole life. I knew little when I started reading a British Nationalist magazine, now almost eight years ago. The magazine had a separate Prisoner of War–page, and a picture of an older man with an introductory statement. This introduction concerned Richard Scutari. The magazine wrote, and quoted ADL’s description [Anti-Defamation League, Jewish extremist organization in America run by its National Director Abe Foxman] and I quote from the same excerpt that I read:

Richard Scutari’s connection with white supremacist organizations can be traced back to 1 982 when he attended the national convention of The Covenant, the Sword and the Arm of the Lord. Only two years later, his involvement with the white supremacist gang The Order propelled him to the highest ranks of his cause and resulted in a 60-year prison sentence. Since his 1989 imprisonment, Scutari has remained actively involved with the radical right, writing extensively for far-right groups and promoting a racist version of Asatru, a polytheistic Norse religion. Recently denied parole, he and several of his colleagues in The Order remain unrepentant about their activities and continue to be a driving force in the white supremacist movement -- even from behind bars. 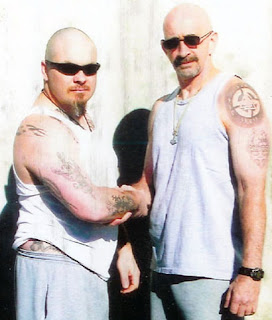 Richard Scutari (to the right) in prison.


After reading this short introduction about Richard Scutari, I wanted to write to him. I thought a couple of hours before taking my pen and a piece of paper about what I would write to him. The first line of my letter went pretty much as the following; “I am Henrik Holappa, a 17-year-old National Socialist from Finland…”

I had heard about the Order and Robert J. Mathews’ heroic struggle in the early 1980’s, which eventually led to his death and the imprisonment of the remaining Order members. Still, however, I hadn’t realized the fact that it was possible to write to those who had been incarcerated. At that time, I had been corresponding with a few political prisoners, but I had not intentionally sought contacts with the Order prisoners, and in that sense, finding Richard Scutari’s introduction excerpt in that British nationalist magazine was a pure coincidence. Now, years after my first letter to Scutari, and realizing what kind of effect he personally has had in my life, I can no longer regard my finding out about Richard Scutari as a pure coincidence. Rather, I believe that I had guidance – and when I consider the spiritual aspect of this – everything may happen for a reason. 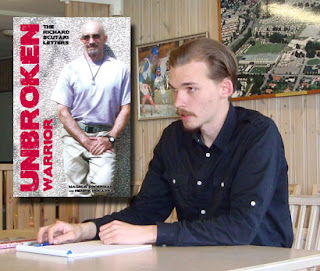 When I had Scutari’s first letter to me in my hands, I still can remember how I felt upon getting the letter. For a few weeks, I had been thinking and wondering if he’d answer my letter at all. Still, after receiving the letter from Scutari, I wasn’t sure exactly who he was, or what his position in the Order had been. I only knew that which I had read. However, Scutari had enclosed an interview in the very first letter which he had done with Magnus Sφderman, and that interview was very eye-opening for me. I spent hours behind the computer, looking up every possible article written about Scutari, Mathews and the Order.

It is now a dark and dismal time in the history of our race. All about us lie the green graves of our sires, yet, in a land once ours, We have become a people of dispossessed…

Our heroes and our culture have been insulted and degraded. […]

[…] Our children are being coerced into accepting nonwhites
for their idols, their companions, and worst of all their mates. […]

How is it that a parasite has gained domination over its hosts? Instead of being vigilant, our fathers have slept. What are we to do? How bleak these aliens have made our children’s future.

[…] We hereby declare ourselves to be a free and sovereign people. […] As soldiers of the Aryan Resistance Movement (ARM), we will conduct ourselves in accordance with the Geneva Convention.

We now close this Declaration with an open letter to Congress and our signatures confirming our intent to do battle. Let friend and foe alike be made aware. This is war! […]

Therefore, for Blood, Soil, and Honor, and for the future of our children, we commit ourselves to Battle.

From the first letter received from Richard Scutari, our yearslong correspondence started. I was a young man with a lot of questions, and was so to speak partly naοve. After a few letters, Scutari introduced me to concepts that I was unaware of – about Folk consciousness, politics, National Socialism, Wotanism – which really is the Will Of The Aryan Nations that is expressed through National Socialism, and the will of Wotan, as Richard Scutari states in his letters and essays, was expressed in National Socialist Germany. Richard Scutari guided me to read and study and we talked about racial survival. Corresponding with Richard Scutari, I grew up mentally, and I felt and I still feel that whatever questions or trouble I had, Scutari had an answer or advice. I never got the feeling that I would have asked something stupid.

I remember that once I was assaulted on my way back home, nothing serious happened, just a punch in my face, and I felt the right thing to do would be to report it to the police. I did so, and I wrote about my experience and decision to Scutari. He wrote me back that my decision had beenwrong, despite whatever my reasons in doing so had been, as we shall not submit ourselves to the authorities, and if we experience events as I described, we shall not act in the way I had done, we shall have our own way to respond. This, of course, was a lesson to me and after this I learned that I must be able to defend myself alone as much I must be able to defend our Folk and Race – there is no one else you can really count on, except yourself and your comrades.

Another important factor during my correspondence with Richard Scutari has been the understanding of racial survival and politics. In 2005, I got involved with the True Finns party, hoping to find a political solution to the problems our Folk and Race are facing. My involvement in the True Finns party didn’t last long; as I experienced that what Scutari had told me earlier, and stated afterward: by merely looking for a political solution, to win elections and fight for small political victories, our race will not survive. “Instead of thinking politics you need to be thinking of survival.”

During the years of correspondence, our dialogue in the letters got deeper and we changed thoughts and opinions about National Socialism. I once sent an article to Scutari where I referred myself as a “Nazi”. Scutari then asked in his letter, dated September 8th, 2006:

Your recent letter shows me that you have come a long way since we first started corresponding. We think a lot alike when it comes to National Socialism.

Scutari also had his affect on my cooperation with the Swedish Resistance Movement. In his very first letters, Scutari stressed how important it is for white survival that likeminded people do cooperate and network with each other. Scutari even changed my views on the Russians and generally on Slavic people, about which I will deal more in my article for the Barnes Review – “Finland and Russia – Friendship and Cooperation” – in which I basically state that white survivalists shall cooperate despite historical and national differences. However, essentially the Finnish Resistance Movement
exists because of Scutari’s idea of cooperating with the Swedish movement, and from his general advice to network with like-minded people.

Now this leads to the conclusion which I stated in the first paragraph in this preface; sometimes there are decisions in life which affect one’s whole life. Indeed, as explained above, the decision I made almost eight years ago when I mailed my first letter to Richard Scutari has indeed affected my whole life. Although, I have never had the honor of meeting Scutari personally, but through our correspondence, I feel I have already met him. In fact, when I was detained in America and was sent to the SHU – Special Housing Unit – I felt that when I crossed the line of not being a free man anymore, I had spiritually came closer to those who have spent decades in prison; especially toward Richard Scutari. I had a little taste of the US federal prison system and it helped me to understand better those who are presently inside the walls.

When I returned back to Europe from America, Magnus Sφderman suggested to Scutari that he write his own autobiography. Sφderman also asked me to write about this idea to Scutari. In my letter, I did so. I was not sure if Scutari would agree to write about his life – his answer was still somewhat surprising. He responded to our request:

I am not much on talking about myself. I also have no
desire to write a book. If I had done anything worth telling
others, I would already have written a book about
myself.

Scutari’s answer pushed me and Sφderman to quit requesting Scutari to write a book. However, it took a few months more when we both realized that the book is already written and the book exists in Scutari’s letters, and it is up to Scutari’s friends to compile the book. Now, we wanted to give it another try, and a question was sent to Scutari, if he would approve our writing a book about him based on his letters. On May 24th, 2010, Richard Scutari answered:

If you and Magnus think there is something of value in my letters, feel free to use them as you wish. It would be nice to have something my grandkids could read that showed to everyone that I wasn’t an ogre. You and Magnus do me a great honor with this project. It must come from others, Kinsman. A man who has to toot his own horn, hasn’t really done much. But when others toot it for him, just maybe his sacrifices count for something.

Now comes the question; why was this book written? On my part, it is obvious and it contains both – personal reasons - as well as admiration towards a soldier who has served the cause and race for nearly three decades without ever feeling sorry about actions that were taken in the ranks of the Order, and still, without ever compromising with the opponents and oppressors of our race – and for standing solid and firm for the cause, even behind bars. This is the horn I toot for Richard Scutari, and my dedication for the man I admire and respect so much, for whom I have the honor of calling Richard Scutari, my Mentor, Friend and Comrade.

You can order the English version of the book at this address: http://kampboden.se/osCommerce/product_info.php?products_id=277
Posted by T.K. at 21:49