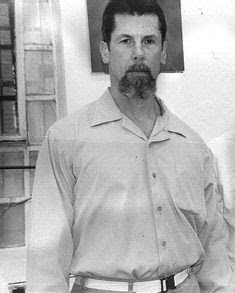 Bruce Pierce died about 2:45 p.m. Monday(8/16/10) at the Allenwood Federal Correctional Complex. He was incarcerated in the high security section of the facility located near Allenwood, Pa.

Bruce Pierce gave his life for our eternal struggle. As Pierce said in memorial to David Lane, “We cannot exceed such commitment, we can only strive to equal it. The cause demands no less from each of us.”

Message from FREE THE ORDER SWEDEN:

Bruce Pierce is the third of the Bruders who have left this life, first was Robert Mathews, who was followed by David Lane a couple of years ago, and now also Bruce. It is on occasions as this that you really think about their actions, of their bravery and courage. Something that always crosses my mind when I think about Bruce is a sequence from a documentary where he was interviewed. The journalist asks Bruce about the declaration of war that the Order sent to the American government, and Bruce answers; "it was the proudest moment in my life... to wage a war against the Unites States' government, but nothing has changed, I still feel the same way".

This comes from a man who was convicted to 252 years of prison, without any regrets, with pride in his voice. This is what I call bravery and determination. Bruce Pierce stood faithfully by his oath, that he swore with his Bruders 1984, through his whole life, a warrior in action as well as in heart.

I did notice that sometimes Bruce could be low. He once wrote me "The financial support reduces all the time, and he has gone weeks without any letters. Soon we will be forgotten and will day be alone in prison".

This was one of the main reasons that we started Free The Order Sweden, because those men should not be forgotten, instead they shall be remembered, and Swedish racialists should learn more about them, and also be inspired with the same passion, fire and determination fight for our survival. But also to help with money. Several times Bruce wrote me and thanked for the donations, and also let me know that without them he would have been all out of money.

Now there is only four people left from Der Brüder Schweigen in prison, let us not forget them, help us help them. Insert a donation to the Free The Order account, or send them a letter or a postcard. Don´t let these men be forgotten. They have given their life to our common Cause, and the least we could do is to support them in their daily life.

In a article that Bruce wrote after David Lane had died, he said something like this: The "line" between the two dates on David's gravestone represents a man's life, a man who sacrificed himself for his race', sisters and brothers, should we do any less? What should the "line" on our gravestone tell about each and one of us?"

This is also true for Bruce as well as David. I'm sure that the "line" on Bruce gravestone will say the same thing about him, a man that sacrificed himself for his race.

My thoughts goes to Bruce's children and family.

Rest in Peace!
Stefan Jacobsson
Free The Order Sweden
Posted by T.K. at 21:21