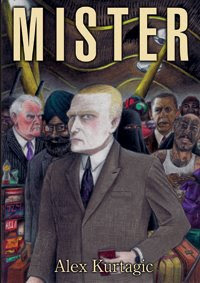 Alex Kurtagic is name perhaps not familiar to some people. Though, most of us who involved in the scene know him as the guy behind the English label SUPERNAL MUSIC which are responsible for several great releases of bands like DRUKDH/HATE FOREST/BLOOD OF KINGU/DARK AGES, SUNWHEEL/KATAXU,ELDRIG, CAPRICORNUS/INFERNUM/THOR`S HAMMER .e.t.c. Also his name can be noticed as maker of the cover of the CD version of the Cult demo "Anno Domini" of the Lengedary band TORMENTOR.


Recently i came across through his personal website, what impressed me more is not exactly the number of bands that he involved, as there is plenty of people who doing this, but the fact that Alex Kurtagic seems to be involved in many different musical and non-musical projects. The most important of all is that amongst many things Alex is a writer too! Soon a new work of him will be published, its a book named "Mister" , here is the description of it :


Mister, 2009
A status-conscious IT consultant travels to Madrid for a week of meetings at Scoptic, who have hired him to implement a fiendishly arcane accounting system equipped with artificial intelligence, in an effort to keep the company one step ahead of the government’s rapacious tax authorities. Renowned within the catacombs of the scientific community, and with an impressive publishing record in the most prestigious trade and academic journals, he expects to do serious business with a serious organisation. The only problem is that he lives in a hot, overcrowded world where nothing works: hyperinflation, crumbling infrastructure, rampant crime, political correctness, corruption at all levels, and a new world order globalist government, determined to regulate, monitor, and tax every aspect of a person’s life; opposed to the forces of totalitarian democracy are occult underground movements, most notably the Esoteric Hitlerists. As a result, nothing goes according to plan, and frustrations mount as things go only from bad to worse... In his first novel, Alex Kurtagic presents a grim and sarcastic depiction of the everyday consequences of living in a world where present social, cultural, economic, political, and demographic trends have been allowed to continue unabated. The novel is replete with obscure information and modern heretics, its elegant prose losing the reader in its bizarre logic, delirious paranoia, and meandering speculations, where nothing - and nobody - is what it seems.


Does this look intresting? Certainly to my eyes yes! I`m always glad to see that there is more and more outspoken like-minded people in the scene who always move further and using their (Musical or whatever) skills in order to enlight and make aware more and more Europeans about things which today are considered forbidden by the present Status quo.
I plan in future (Depends always on my free time) to prepare some questions for Alex which which will be used as a small debate about his works and mostly around his books. In the meantime, keep checking his websites for the latest news more informations about his works.

The link of his sites are:
ALEX CURTAGIC OFFICIAL SITE
http://www.alexkurtagic.info/