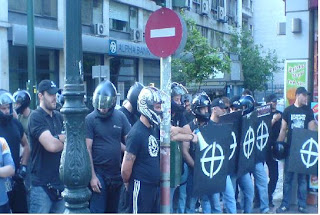 It seems that the last years Athens have become a "modern" and "progressive" city like the ones in the rest of Europe. This year the "gay parade" tried to provoke by passing near the Golden Dawn`s main offices in the centre of Athens. Though , they did not thought that Golden Dawn members was there. So members of the Youth Front stood in front in order to to block the "march" of the faggots and other similar genetic garbage and also to protect the offices. As usual the police (within 2-3 min time!) placed full forces against the Golden Dawn members and later used chemicals without a reason. The same time also other people by the roofs of the buldings around had throw eggs to the faggots while the same time the comrades shoting "Faggots out from Athens!"
This is was a message that there is people around Europe who will not tolerate this trash walking around having full protection by the goverments and media.
Posted by T.K. at 21:15