Let the word Community be replaced by BLOOD! 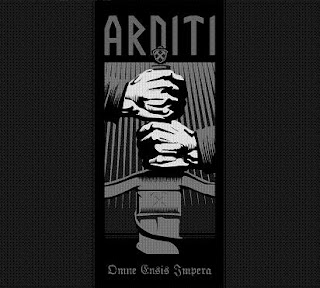 New album by the Swedish masters of Martial/Neo Classical Music. And Judging from the samples it seems that here we have another masterpiece and perfect follower of their previous album "Standarts of Triumph". Here is the official statement taken from Arditi`s official website:

The highly anticipated new album by the Swedish duo is finally upon us, under the title "Omne Ensis Impera". The sense of determination that echoes through their music and which has brought them to the forefront of Martial / Industrial Neo-Classical scene has stayed untouched, evoking the sense of duty and commitment that Italy's WWI elite storm troops, from which the name Arditi originated, were known for.

"Omne Ensis Impera" introduces an additional strength to Arditi's compositions - epic orchestral loops and thunderous percussions are granted a more prominent role, stirring the damp and suffocating ambiance that the duo have always produced so well with their use of ominous synths, obscure speeches and mesmerizing narrations.

Similarly, shades of the Italian Futuristic movement of the early XXth century, which served as inspiration in the early days of the project, remain imprinted in Arditi's work - "Omne Ensis Impera" could well be a modern interpretation of the Futurist's goal of glorifying warfare to an artistic expression beyond its inherent violence and intrinsic sense of heroism.

"Omne Ensis Impera" has been mastered by Kamrat Nordvargr of Mz.412 and Toroidh, an old ally of the band. Nordvargr has also contributed with additional arrangements on a couple of tracks, and prepared a slightly modified track list, which will feature on the vinyl version of the album that will follow soon, together with a limited edition box set. The CD version is presented in a deluxe glossy Digipak, with embossed artwork.