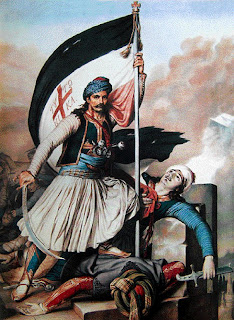 THE HELLENIC UPRISE OF 1821
After the fall of the Byzantine Empire in 1453, the Turks spread in the areas of the once Byzantine territories, including Hellas. The Hellenes often caused trouble to the Turks and their allies in the following centuries with shock-raids or low scale guerilla warfare, but nothing as organized and widespread as it was happened in 1821.
Although almost 400 years passed after the occupation of Hellas from the Turks, the Hellenes managed to keep their Blood pure. The Turks were not settled in Hellas as they did in Asia Minor, but they had established garrisons. Women who were left pregnant from a Turk were killed.
Thus, the Hellenic spirit was still alive, urging the Warrior Blood of the Hellene to raise his Sword in defiance and hate against the Mongol intruder. And so it was done.
After several meetings of Hellenic captains and guerilla leaders, they declared on the 25th of March 1821, a total war against the Turks and their allies (Albanians, Egyptians, etc.).
After pressure towards the church to grant officially its "blessing" (the church wasn’t too eager to fight the Turks since they had made pacts with them not to harm them, leaving the rest of Hellas in the Turkish hands), captains and guerilla warriors from all over Hellas raised their swords against the Turks with one battle cry: Victory or Death!

The first Hellenic town to be freed was Tripolitsa . Captain Kolokotronis, leading his army, stormed the town in a decisive battle that swept the Turkish army there, leading it to total destruction. No Turk was spared. When the battle ended, the soil was moistened by the Turkish blood that many chroniclers wrote that the horses were slipping. Kolokotronis had a deep hatred against the Jews, because they were helping the Turks by betraying every Hellenic movement against them,( Jews also were slave traders that time) etc. He rounded up every Jew in the town and executed him, declaring that such vermin has no place on Hellenic Soil! That day by order of Captain Kolokotronis 3000 Jews was slayed.
Kolokotronis led countless victorious battles against the Turks, all over Hellas. He was so much feared by them that his name was synonymous to Terror in the turks. In another incident he confronted an entire turkish battalion with a handful of men, charging against them. The turks believed that they were the front ranks of a bigger army and the turned in panic, with the Hellenes slaughtering them down.
Another significant captain was Nikitaras, nicknamed the Turkslayer. He engaged the guerilla units from an early age and he took part in countless battles. In one incident, he killed so many turks that his hand was swallen and he couldn’t remove his sword. He once said to a chronicler that "…there was no greater joy than slaying the turkish dogs!"
To write down every battle that took place during these years would take many books. So in short, other important captains were Karaiskakis, Odysseas Androutsos, K. Kanaris (ancestor of Admiral Von Kanaris of the German Wehrmacht, whose daring tactic of burning turkish ships by crashing upon them small boats loaded with flammable material earned him a high esteemed reputation) and many more, everyone distinguished for his courage and deeds against the vast turkish army and their allies.

The Hellenes have restored their ties with Ancient Hellas, and they knew that the war that they were fighting now was important for the preservence of the Ancient Hellenic Spirit.
In one incident, a turkish guard was cornered upon the Acropolis and soon their lead supplies ran out, so they decided to bring down the columns of Parthenon and get the lead that it was used to hold the column pieces together. When the Hellenes heard about this, they sent them a message and told them that they will give them ammunition in order not to touch the monument. They said that these stones was the Cause that they were fighting for.

After the liberation of Hellas, years later, petty politicians tried to erase their names from the pantheon of Heroes because they wanted to manipulate for their own interests the new established government. Many brave warriors were jailed because they wouldn’t cooperate with this traitorous scum. But their reputation was written with Fire and Steel upon the Battlefields of Hellas, not by trying to please the turk, as these political whores did.
Important was also the fact that many people from other places of Europe have come as volunteers to help the Hellenic fighters , Mainly people from France , England ,Germany(The famous Bavarian fighters who in honour of them there is still today a monument of a big Lion in Nafplio city) and Russia.
What we can learn from the Uprise of 1821, is that only a strong bastion of a few but determined people can change everything. These warriors could be a perfect example for what we are fighting for in the present: the liberation of Europe!

The mountains look on Marathon --
And Marathon looks on the sea;
And musing there an hour alone,
I dream'd that Greece might yet be free
For, standing on the Persians' grave,
I could not deem myself a slave
....
Must we but weep o'er days more blest?
Must we but blush? -- Our fathers bled.
Earth! render back from out thy breast
A remnant of our Spartan dead!
Of the three hundred grant but three,
To make a new Thermopylae.

By Lord Byron (English Volunteer in the Hellenic Revolution of 1821)

"I was, moreover, much impressed by a biography of Mozart which was read aloud; and the newspaper accounts and monthly reports of the events of the Greek War of Independence stirred my imagination deeply. My love for Greece, which afterwards made me turn with enthusiasm to the mythology and history of ancient Hellas, was thus the natural outcome of the intense and painful interest I took in the events of this period. In after years the story of the struggle of the Greeks against the Persians always revived my impressions of this modern revolt of Greece against the Turks."