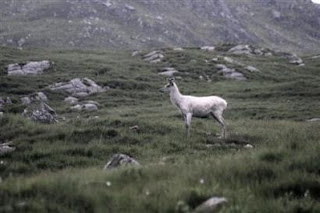 Found this very intresting news on another forum and i think its good to share it here. There is 2 kind of people. Those who believe in the European Traditions and supertitions of Old and those who think that its just a coincidence. I definately belong to the first category.

"LONDON (Reuters) - A mythical and ghostly creature has appeared in the wilds of the Scottish Highlands -- and has been caught on camera. The rare white stag, from the red deer species, is believed to be among just a tiny handful living in Britain, according to a conservation group.The John Muir Trust is now keeping the stag's location secret for fear of poachers.
"To see him amongst the other stags was truly thrilling because he does look like a ghost: you do a double-take," Trust Partnership Manager Fran Lockhart, who filmed the stag, told Reuters.White stags are seen as a magical and powerful force in many mythologies.The animal's ghostly glow comes from a recessive gene which causes leucism, a condition which reduces the normal brown coloring in hair and skin. They are not albinos, which have red eyes due to lack of pigment.In Celtic traditions, white stags represent messengers from the afterlife. Arthurian legend has it that the creature can never be caught -- King Arthur's pursuit of the animal represents mankind's spiritual quest.It is also said that for those who set eyes on the animal, a momentous moment is near."They say their appearance is meant to herald some profound change in life for those who encounter them -- but I am still waiting," said Lockhart.Her dog, though, stood transfixed for 45 minutes watching the white stag, instead of his usual scampering around.Lockhart believes the Scottish Highlands' white stag is between 6 and 7 years old. She said he is maturing well, with a good set of antlers.The last official recording of a white red stag in Britain, not to be confused with the more common white fallow deer, was last October when the body of one was found decapitated on the moors between Devon and Cornwall."

What White Stag symbolizes:
The white stag is a familiar creature of myth and legend. Its origins are likely in the totemic period of early Indo-European society, particularly the northern societies of the Celts and pre-Indo-European cultures, whose subsistence was gained not only through agriculture, but through hunting.This dependence on deer may be seen in the zoomorphic Celtic god Cernunnos, depicted as being a man with the antlers of a deer. The white stag in Celtic myth is an indicator that the Otherworld is near. It appears when one is transgressing a taboo--such as when Pwyll tresspassed into Arawn's hunting grounds, or when Peredur entered the Castle of Wonders in his second adventure at the house of the Lame King. It also appears as an impetus to quest--the white stag or hart often appears in the forests around King Arthur's court, sending the knights off on to adventure against gods and fairies.The white stag is not only a creature of the gods, but is a god himself, symbolizing the creative life force of the universe--sex, life, and also death.