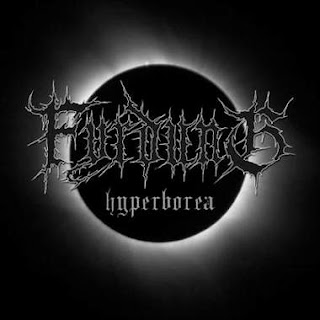 Its always a pleasant suprize to get an album and from a band which is already good but in the end to hear something totally different from what you already knew. Same happened to me with the Swedish band FYRDUNG. Last week i got from a comrade ( Thank you Niklas!) the latest album of this Swedish guys, named "Hyperborea". Anybody who is involved in the Racialist scene is more or less aware of FYRDUNG. I have heard some of their early material that i liked a lot but because Fyrdung sing in Swedish language i always had the opinion that this stuff appeal more to people who speak or understand Swedish. Fyrdung is melodic R.A.C. with some Folk touches, which at times reminded me of another Swedish band named ULTIMA THULE.
Ok , forget all this now! FYRDUNG made a totally different album. Their new stuff is Melodic Black Metal in the good old Swedish vein, with the biggest influence to be the Classic Dissection`s album "The Somberlain". The lyrics still remains in the same vein ofcourse. I`m very glad to see that like-minded people who come from another scene to be able to play such inspiring music that i grew up with. This album is A MUST for people into the above mentioned musical style.

"Hyperborea" released by NORDISKA FORLAGET: http://nordiskaforlaget.se/
N.F. have available many other Fyrdung titles and also some merchandise plus a huge selection of Books, posters e.t.c.

Both the band and the label deserve your 100% support!