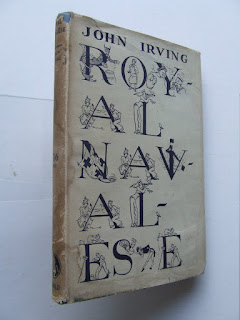 "I am bringing Himmler to completion, revising the final text and pictures, while with my left hand, so to speak, I am doing much the same with a 200-page book my late father wrote and published in 1946, Royal Navalese - a delightful glossary of British naval slang and language, illustrated by my Mother – as illustrator was her profession.

My father J J C Irving, a Royal Navy commander, was active in both World Wars, so I only really knew him when he returned in 1945; he wrote movingly about those and other episodes, and I recognise now many of the phrases, which my mother had picked up and polished, and they became part of our family language over the years while he was away at the wars.
She was superstitious too; she told us that punching a hole through the bottom of the egg-shell when we had a (rare) boiled egg at breakfast was the way to save a sailor from drowning, and so we four children dutifully punched away. After he came home, undrowned despite HMS Edinburgh “going down” beneath him in 1942, he told me, with the merest soupçon of a sneer, that British Justice “is the best that money can buy,” and I believed that too. In peacetime he stayed in navy uniform, HMS Discovery, and on Admiralty charts there is a windswept bay in the Antarctic named after him.

My father's Navalese confirms it is largely a post-war invention, the glossary lists only other terms used to describe the Germans. It's not important, except I suppose to those who have made money out of it. Maybe Americans at the time spoke of Nazis? Google will tell us when the word, like “Holocaust” in 1970, first came into the common language."