Wolfhead, Tolkien and The Primal Fear of Man

"The feeling on aversion human beings have for the snake, the bat and the earthworm perhaps originates in some ancestral memory. It might go back to a time when animals of this nature, of monstrous dimensions, terrified prehistoric man" 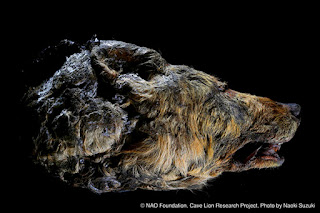 The picture you see above is a giant Wolfshead discovered few days ago. When I saw this news (For more info check HERE) and read about the big size of this wolf, immediately brought to my mind Tolkien's GROND at "Lord of The Rings"
There we see this:

"Great engines crawled across the field; and in the midst was a huge ram, great as a forest-tree a hundred feet in length, swinging on mighty chains. Long had it been forging in the dark smithies of Mordor, and its hideous head, founded of black steel, was shaped in the likeness of a ravening wolf; on it spells of ruin lay. Grond they named it, in memory of the Hammer of the Underworld of old. Great beasts drew it, orcs surrounded it, and behind walked mountain-trolls to wield it." 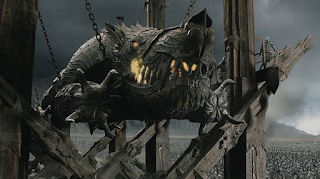 Despite the fact the Tolkien was christian, in his works he had put fragments from various Europen myths and legends. On every side so to say. "Good" and "Evil"
So after all there was a time, much much older than we know today, that giants of every kind was not just fantasy or something that our history/mythology used as allegory?
Probably....
And also, and what about Gods, Demigods and Heroes that fought them?
Posted by T.K. at 12:39