ABSURD - The Return of The Tyrants of German Black Metal

ABSURD returns with a new line-up and a come back gig!
-------
Official statement taken from:
www.hordeabsurd.com

After a five-year hiatus, the tyrants of German Black Metal are getting ready for a series of live performances with a new line-up! The first on the list is the legendary Asgardsrei-festival, which is taking place in Kiev, on December 16th, where Absurd will play alongside of Goatmoon, Naer Mataron, Peste Noire, M8l8th, Burshtyn. Tickets can be ordered here: www.militant.zone/ar2017

Founding member JFN has reformed the band with a new line-up of committed session musicians, while he himself will perform vocal duty. JFN explains this decision in a brief public statement:
"It's not a novelty for Absurd to replace some members every now and then, this has happened more than once ever since 1992. When band activity dropped to zero after 2012, me and Wolf concluded that I should give it a try and reform Absurd once more. Our first live apperance will take place at the Asgardsrei festival, where Commando Wolf, long-time friend of Absurd, will join us to play bass guitar. Together we'll play the entire tracklist of the notorious "Asgardsrei"-album, from 1998, as well as some classic songs of the early band history. Be there or drop dead!" 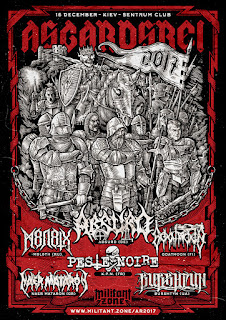