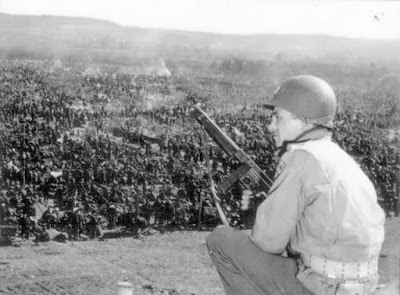 Above: U.S. army prison camp at Sinzig-Remagen on the Rhine, which held around 200,000 prisoners at capacity, June 1945. Many thousands died there from dehydration, starvation, and exposure while the U.S. army refused to supply shelter and food, though it was readily available. Photo: U.S. Army Signal Corps (courtesy of James Bacque)

James Bacque’s new 60-minute documentary film, “Other Losses,” based on his Talonbook Other Losses, which provoked a world-wide reaction. More than 250,000 copies have been sold since the book was first published in 1989, Talon has just reprinted the second edition in 2015, and it has been translated into 13 languages.


The book and the film expose allied mistreatment of Germans after the end of World War II, in 1945; more than 9 million people died of enforced starvation in Germany. The film features gruesome archival footage and touching modern interviews with survivors. The eminent British historian Richard Overy, who publishes with Oxford University Press, calls the film “interesting and serious”