The Nationalist "No" To The Referendum 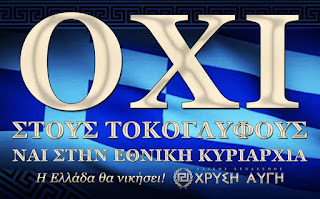 Finally, the sunday referendum is over and almost all votes has counted. The result is something like this: NO 61% - YES 38%

From the very first moment the Hellenic Nationalist party of Golden Dawn has spoke in defence of "No" vote and what this must mean for any concious Greek.
Definately something totally different from what the leftist goverment or any other "No" supporters. Golden Dawn`s "No" is politically unique cause there is no other party currently in Hellas that express the same cosmotheory and biotheory. The Nationalist "No" against the current so-called "European"(In fact ANTI-European to the bone) Union and its institutions. its "No" against ANY memorandum and any pepresentative (The media, central bank etc) of economic trans-atlantic oligarchies who have turned European Nations in their own playground and "zones of influences" serving their own intrests. Lets hope that the "No" of today will be the first step that will serve as an act of total defiance towards the rulers of Europe the last 70 years. For sure the current political powers, products from the very womb of this system will try to put the European people in their own ranks. The duty of every racially aware European must always be the awakening of the true European soul. The "No" of the 5th of July must be used by the Nationalist forces as another good opportunity for a step towards this goal. 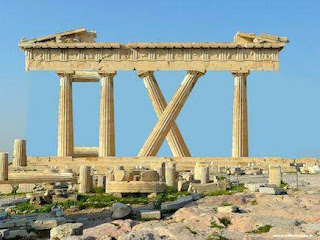