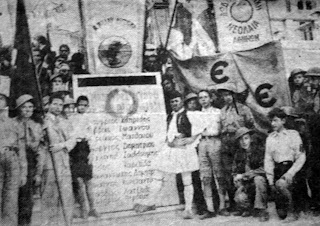 Previous Part:
Hellas in the 1930`s: The 4th of August Regime

The EEE organization created in Thessaloniki (North Hellas) in the 1920`s. Its initials means the "National Union Hellas".
The members uniform consisted by a steel helmet, black boots and yellow shirts (The byzantine empire colours).
At 1932 EEE had 12 divisions and 7000 members all around Hellas.

The three E had several nationalist , anti-communist and anti-jewish activities. Their biggest and more massive was during the 1930`s. The most known ones are: In 1931 members of EEE attack in Jewish Ghetto "kambel" in  Thessaloniki and burned it (Jews had several Anti-Hellenic action. One of the many was together with communists, they were spreading leflets against Hellas and for giving a part of it to Bulgarian communists.)  In June 1933 EEE did a 3000 members march from North of Hellas to Athens (Obviously influenced by Mussolini`s march to Rome). The National Union Hellas stoped its activities around the middle 1940.

Some photos and Documents of the organization: