The Political Views of Otto Rahn 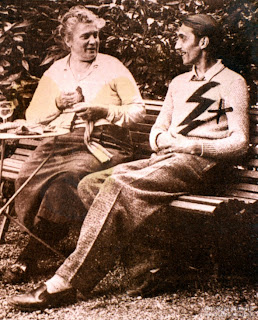 The SS officer Otto Rahn , the writer of the two masterpieces "Kreuzzug Gegen Gral" and "Luzifer`s Hofgesind" is a person surrounded by a lot of rumors and controversy. His early death by suicide and the fact that he was a great writer and poet , allowed some circles to spread several rumors, speculations and lies around his mysterious but definitely intresting lifetime. The case of Otto Rahn has the typical "Too good to be a nazi". So, years after his death the usual rumors start floating around. 99% of them based on lies by third party people. Some of them enemies of Otto Rahn while he was alive, and some from his own family obviously as an attempt to "white wash" the family`s "evil past".

To both of his books Otto Rahn never mentions really openly his political preferences. But was in need to do that as SS officer and member in the close circle around Heinrich Himmler?. (Simple logic:is it possible someone so close to the Reichsführer of the SS to not be double checked before allowed coming so close? His family , his sexual preferences , his ancestry e.t.c.).

Somes months ago, while i was re-reading "Lucifer`s Court" i found it as an intresting idea to write down some parts that might say something about his political views and the way he saw the world. I`ll not say my opinion on it. You , viewer of this blog check it by yourself (If you have not read the book already) and draw your own conclusions. If you someone write these words without known him, what you`ll think about his political views?

"Despite everything, it is my hope that one day Europe will be free from all Jewish mythology"


"Augustone`s racial theories should be studied closely. We should also take into account the litle-known suggestion of the British statesman Benjamin Disraeli, a Jew who believed that history can be understood only if racial questions are properly understood"


"On the piazza, where some Jews were reading Hebrew newspapers, i spotted someone who was a well-known member of the German Zentrum party and who fled when it became too hot for him to remain on German soil"

"Today in Geneva, delegations from all over the world gather at the League of Nations, or the Societe des Passions (The League of Passions). There, many nations and nearly all races from Europe and the world are represent--to create even more disorder. For the assemblies there was built an omposing palace where the Jewish representatives of Soviet Russia speak loudly or smile quietly. A few previously unemployed Germans were allowed to earn a few francs when they built it. The wages were handed over to them directly so they could eat. The fifty centimes a day failed to pay for a bed in the dormitories of the Salvation Army, so only the homeless shelter remained open to them. Today, all these Germans have plentiful bread and a good bed--at home.

"It is Moses who was imperfect and impure otherwise he would never taken a Moor for his wife, reprimanded his siblings, and let his God strike them with leprosy. It was Moses and his tribe who imposed upon us their faith, writings, and laws;it is they who are imperfect and impure, the souls of slaves and bastards"

"Not suprizingly, the other Sir Oldcastle, Falstaff, didn`t trust Jews. When he swore an oath, he would say: "or I am a Jew else, an old Ebrew Jew."" 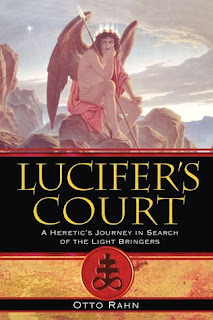 Previous posts on this blog related with Otto Rahn:

THE SECRET GLORY of SS Obersturmführer OTTO RAHN
(Several lies on this documentary. Apart from that, intresting to check it)


Was Richard The Lionheart a Heretic?