Hellas - The Vanguard of Europe 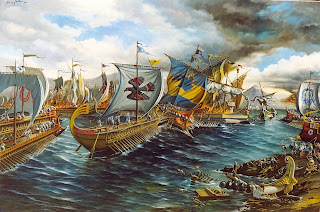 September of 480 BC After the battle of Salamis, and destruction of the Persian fleet. General, and leader of Greek forces Themistocles proposed that the remaining Persian ships who run away must be hunted down and the Greek Army must cut down their passage to Asia who was at a place named Hellespont. Spartan Admiral Euriviades totally opposed to the proposition of Themistocles because if the bridge of the Persian army will be burned, this will be a big danger for Europe and the European Nations as the Asiatics will flood Europe. This proves that the Greeks of that time was fully aware for what their were fighting for, and that was not only for Hellas but also for the rest of Europe as well.

"Next day the Greeks, seeing the land force of the barbarians encamped in the same place, thought that their ships must still be lying at Phalerum; and, expecting another attack from that quarter, made preparations to defend themselves. Soon however news came that the ships were all departed and gone away; whereupon it was instantly resolved to make sail in pursuit. They went as far as Andros; but, seeing nothing of the Persian fleet, they stopped at that place, and held a council of war. At this council Themistocles advised that the Greeks should follow on through the islands, still pressing the pursuit, and making all haste to the Hellespont, there to break down the bridges. Eurybiades, however, delivered a contrary opinion. "If," he said, "the Greeks should break down the bridges, it would be the worst thing that could possibly happen for Greece. The Persian, supposing that his retreat were cut off, and he compelled to remain in Europe, would be sure never to give them any peace. Inaction on his part would ruin all his affairs, and leave him no chance of ever getting back to Asia - nay, would even cause his army to perish by famine: whereas, if he bestirred himself, and acted vigorously, it was likely that the whole of Europe would in course of time become subject to him; since, by degrees, the various towns and tribes would either fall before his arms, or else agree to terms of submission; and in this way, his troops would find food sufficient for them, since each year the Greek harvest would be theirs. As it was, the Persian, because he had lost the sea-fight, intended evidently to remain no longer in Europe. The Greeks ought to let him depart; and when he was gone from among them, and had returned into his own country, then would be the time for them to contend with him for the possession of that."
The other captains of the Peloponnesians declared themselves of the same mind."

P.S. Note that here in the English translation of Herodotus it writes "Tribes". In the original text Herodotus use the word "Εθνεα" which in English translation means "Nations". So thats a mistake by the translator. But wait! Its not the European Nations a fabricated term that maded after the so-called "French" Revolution and the "enlightment"? Remind that next time to your marxist teachers in schools and universities. 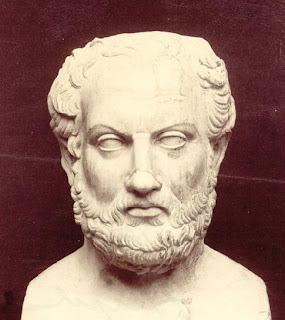 (Themistocles, the heart and soul of the battle of Salamis. If Europe was truly European, big streets of many European cities had to bear his name as a saviour of Europe.)
Posted by T.K. at 01:37