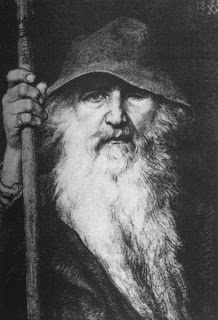 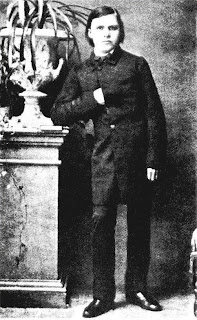 Did the German philosopher Friedrich Nietzsche had an encounter with Wotan? If yes, in which way this event influenced his writtings?
Here is a not-so-known story taken from from Carl Gustan Jung`s essay "WOTAN" (1936):


"To the Unknown God"

Mistral wind, chaser of clouds,
Killer of gloom, sweeper of the skies,
Raging storm-wind, how I love thee!
Are we both not the first-fruits
Of the same womb, forever predestined
To the same fate?

In the song of praise known as "Ariadne`s Lament", Nietzsche is completely the victim of the hunter-god:


Stretched out, shuddering,
Like a half-dead thing whose feet are warmed,
Shaken by unknown fevers,
Shivering with piercing icy frost arrows,
Hunted by thee, O thought,
Unutterable! Cloaked one! Horrible one!
You hunter behind the clouds!
Struck down by your lightning bolt,
Your mocking eye that stares at me from the dark!
Thus I lie,
Writhing, twisting, tormented
With all eternal tortures,
Smitten
By you, cruel huntsman
You unknown-God...

This remarkable image of the hunter-god is not a mere dithyrambic figure of speech but is based on an experience which Nietzsche had when he was fifteen years old, at Pforta. It is described in a book by Nietzsche’s sister, Elizabeth Foerster-Nietzsche. As he was wandering in a gloomy wood at night, he was terrified by a “blood-curdling shriek from a neighbouring lunatic asylum,” and soon afterwards he came face to face with a huntsman whose “features were wild and uncanny.” Setting his whistle to his lips “in a valley surrounded by wild scrub,” the huntsman “blew such as a shrill blast” that Nietzsche lost consciousness – but woke up again in Pforta. It was a nightmare. It is significant that in his dream Nietzsche, who in reality intended to go to Eisleben, Luther’s town, discussed with the huntsman the question of going instead to “Teutschenthal” (Valley of the Germans). No one with ears can misunderstand the shrill whistling of the storm-god in the nocturnal wood.


Was it really only the classical philologist in Nietzsche that led to the god being called Dionysus instead of Wotan – or was it perhaps due to his fateful meeting with Wagner?
Posted by T.K. at 18:55