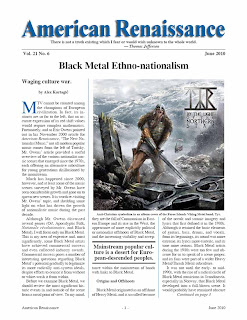 Black Metal Ethno-nationalism: Alex Kurtagić, a musician and head of a European record label, provides an extraordinary overview of a bourgeoning phenomenon — ethno-nationalist “heavy metal” music. This genre, largely based in Scandinavia, is especially controversial. Drawing from elements of pagan mythology, classical music and Romantic art, so-called Black Metal expresses a "neo-võlkisch" ideology that also features occultic — including Satanic — imagery, often evincing strong anti-Christian overtones. Some offshoots flirt with National Socialism. Black Metal’s popularity is on the rise in the West, and enjoys a small but loyal fan base in the United States. This article considers the larger cultural implications of this movement, in which young whites are finding a channel for racial identity and expression that is denied them in what passes for mainstream culture today.