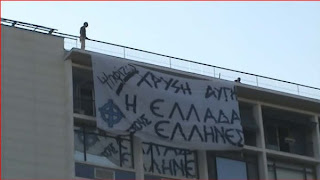 On 9th of May Golden Dawn organized an Anti-Immigration Demo in the centre of Athens. In a place considered as the most "dangerous" one as its occupied by immigrants (Asiatics and Africans mainly), junkies , drug dealers, whores and other "human" garbage of every kind. About 10 anti-racists groups, anarchists + leftists (around 200 people all in all) tried to stop the Golden Dawn Demo by organizing Anti-demonstrations. Ofcourse they failed!
You can read a full report in English here :
http://whitereference.blogspot.com/2009/05/about-300-members-of-golden-dawn.html

The news was every were around the world. From Finland to England ,France and even New Zealand! The link above is the most reliable one i have seen so far. There you`ll find photos & videos as well.
Golden Dawn managed to sent the message in every direction : There is still people who are willing to defend their country at every cost. Your dreams of killing the National and European Identity will not pass!
P.S. A Finnish comrade informed me few min. ago that few days ago in Umeå, Sweden, 50 Swedish adults and youth attacked with rocks against Immigrant houses as well. If i`ll find a link somewhere i`ll post it here in the next days.
Posted by T.K. at 23:40