For The Fallen Legionaries and Their Leader 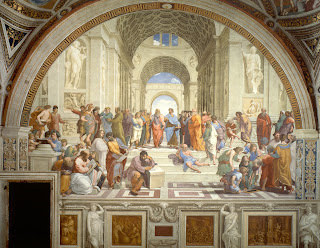 THE SCHOOL OF ATHENS

The School of Athens, created by Raphael in 1511, is one of the world's most famous paintings.

But who are all these people in it? 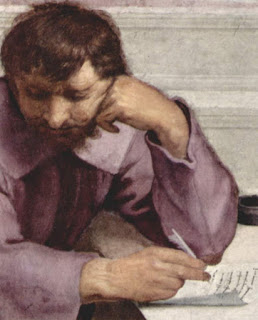 1) Heraclitus (535-475 BC) Pre-Socratic philosopher whose work only survives as "Fragments." These have long given him an aura of mysterious wisdom. Here portrayed as Michelangelo (1475-1564) Italian Renaissance painter, sculptor, and architect, best known for his statue of David. 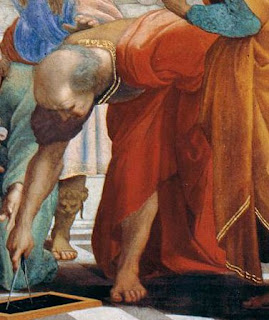 2)Euclid (4th-3rd century BC) The founder of geometry. His work "The Elements" was a standard maths textbook for over 2,000 years. Portrayed as Bramante (1444-1515) Italian architect who brought the Renaissance style to Rome and Milan. He helped design St. Peter's Basilica. 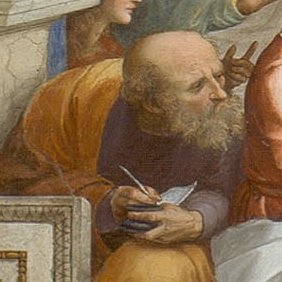 3)Anaximander (610-546 BC) Important pre-Socratic philosopher from Miletus. The first philosopher known to have written down his studies, he was also an early scientific thinker whose ideas influenced geometry, geography, and astronomy. 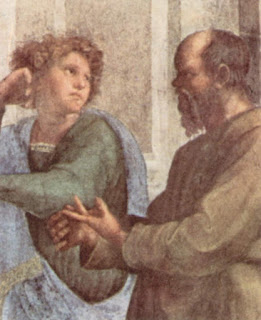 4)Left: Aeschines (389–314 BC) Athenian soldier, statesmen, and orator. Listed in the Alexandrian Canon as one of the 10 Attic Orators - the greatest speakers of classical Athens.

Right: Socrates (470–399 BC) The godfather of Western philosophy. 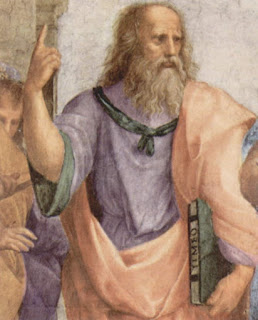 5)Plato (424–347 BC) Second founder of Western philosophy. Student of Socrates, teacher of Aristotle. He started the Academy: the first higher educational institution in the West. Portrayed as Leonardo da Vinci (1452-1519) The ultimate Renaissance man. 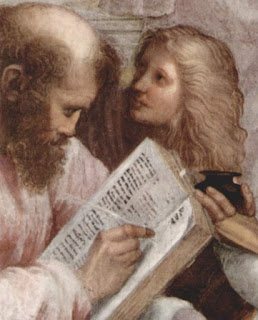 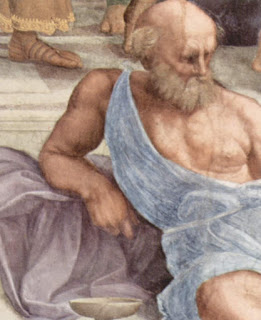 7) Diogenes (412-323 BC) Ultimate Cynic philosopher. He begged for a living, sabotaged Plato's lectures, and made fun of Alexander the Great (to his face). He lived in conscious protest against the perceived hypocracies, trivialities, and pretensions of his age. 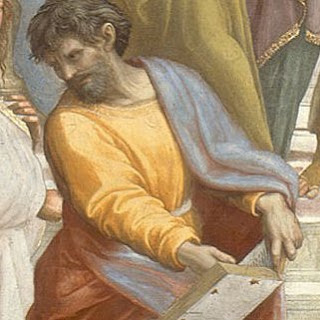 8) Parmenides (6th-5th centuries BC) The founder of ontology, i.e. the branch of philosophy that considers existence and reality. 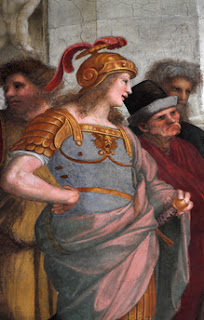 9) Left (with helmet): Alcibiades (450–404 BC) Controversial Athenian general, statesmen, democratic leader, and trouble-maker; both a hero and a villain, but a hero in the end.

Right (with hat): Antisthenes (446–366 BC) The founder of Cynic philosophy, pupil of Socrates. 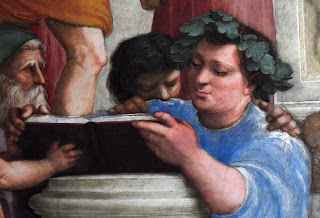 10) Epicurus (446-366 BC) Philosopher and founder of Epicureanism, an alternative to Platonism. His teachings focussed on the way to achieve human contentment, though this has sometimes been misrepresented as a sort of materialistic hedonism. 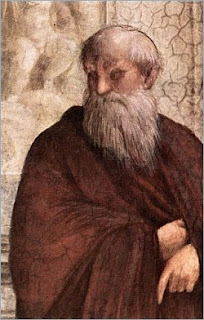 11) Carneades (214–129 BC) A founder of Skepticism. He reacted against the dogmatic adherents of Stoicism and Epicureanism by questioning human ability to ascertain truth at all. 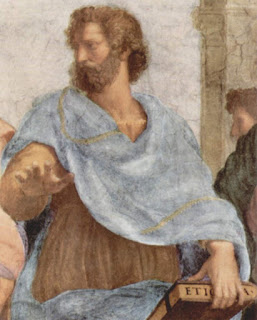 12) Aristotle (384–322 BC) Impossible to summarise other than by saying he has influenced every aspect of Western culture and philosophy. 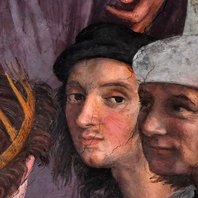 13) Left: Raphael himself, here portraying Apelles, a 4th century BC Greek painter and the most celebrated master of Antquity. 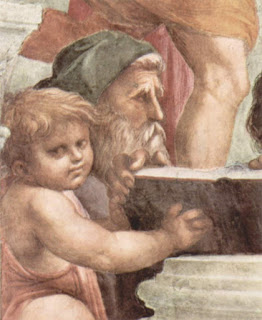 THE MEDICI : Godfathers of The Renaissance 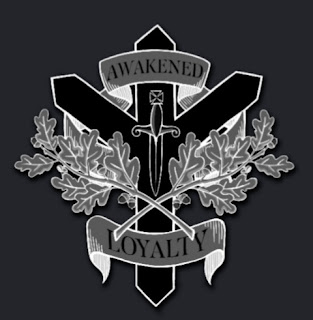 To The Dead of November 9th

Never were you nearer to us —,

As now when the Grim Reaper

Never were you so necessary to us.

Towers in the storm of care.

Never were you as alive to us.

We are as acquainted with you as we are with death.

We listen for the call. And we hear

In the night, when all is silent

Your voices. They warn, they swear:

Not only victories! The victory!

As our flags sink

God goes as the wind through the field.

All our thanks and thoughts 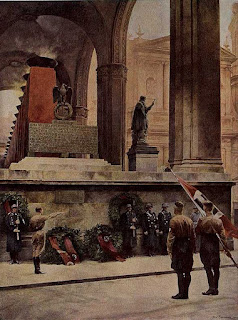 To Ride The Solar Storms 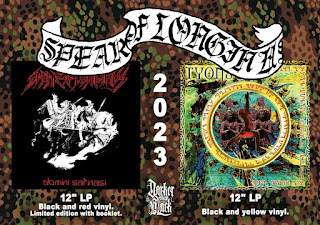 These, plus more Spear of Longinus stuff are (and will be) available from:

The Dying Warrrior and The Fallen Comrades

"The dying warrior on the east pediment (c. 480 BCE) marks a transition to the new Classical style. Although he bears a slight Archaic smile, this warrior actually reacts to his circumstances. Nearly every part of him appears to be dying. Instead of propping himself up on an arm, his body responds to the gravity pulling on his dying body, hanging from his shield and attempting to support himself with his other arm. He also attempts to hold himself up with his legs, but one leg has fallen over the pediment's edge and protrudes into the viewer's space. His muscles are contracted and limp, depending on which ones they are, and they seem to strain under the weight of the man as he dies." 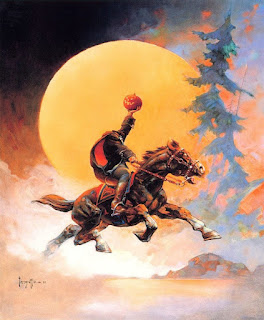 Few people know the reason as to why Frank Frazetta painted two versions of the Headless Horseman. In 1995, Frank was commissioned to do his rendition of the famed beheaded night rider during his period of semi-retirement. He was very selective with his choice of work at that point because, to be honest, he preferred enjoying life with his family on his beautiful 67 acre estate in the Pocono Mountains; but this character interested him, so he accepted the job.

As with all of Frazetta commissioned pieces after 1970, he was granted full liberty to create whatever he felt worked best with the subject matter. As with most cases, his masterful imagination took it one step beyond anyone's expectations, which is why he has such a world-wide following to date.

Frank's first rendition of the Headless Horseman was very dark and powerful, showing the more sinister side of the famed character. But unexpectedly, just a few days after submitting the original artwork, he received a phone call from the publisher who expressed his appreciation for Frank’s time and effort, but declined the work. He stated it was too dark for its use in publishing for the targeted audience of younger children. Frank didn’t take it to heart and understood where his client was coming from-- this was not an uncommon thing during his long career. Instead of getting upset about it, he immediately created a new version to appeal to the younger audience upon the publishers request.

Even with numerous stick-ball games between the finalization of the second version of the Headless Horseman, it was completed in just three days and was an entirely new take on the commissioned art.

The second version was more colorful with a wide variety of delightful tones, most obvious was the change from blue to orange which expressed a more festive side to the seasonal theme. Though many fans bought prints of both versions of the painting, Frank personally stuck to his guns stating the first version was the better of the two. 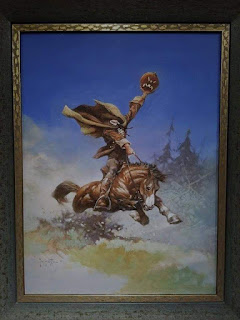 Older Posts Home
Subscribe to: Posts (Atom)
"...I`m Determined to prove a villain and hate the idle pleasures of these days"
RICHARD III